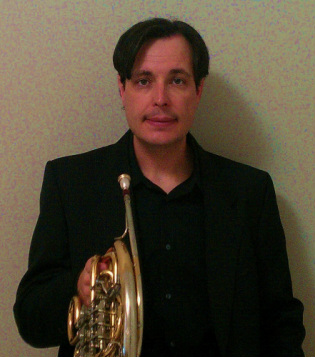 Spanish-born hornist Lluis Soldevila began his musical career at the Superior Conservatory of Music in Barcelona, Spain. He has more than 17 years of international playing and teaching experience. He studied with Dr. Vicent Aguilar (Spanish National Orchestra and later Liceo's Orchestra soloist). He also received lessons from some of the best players and educators of the time as Javier Bonet, Eric Terwilliger, Ab Koster, Vicente Zarzo, Miguel Torres, Salvador Navarro, Juanjo Pastor, Salvador Chulià, Salvador Seguí, J. M. Carbonell, Maurice André, Jacques Mauguer among others. He received his Master's Degree in Music from the Valencia and Castellon conservatories of Music.

Lluis also has studies in psychology from Uned University (Spain).

Until 2005 Lluis worked primarily in Europe, he has played as a soloist and member in various of the European orchestras and with wind ensembles in Valencia and Barcelona. Later he has collaborated with various Floridian orchestras and the Miami Music Project in Miami, Florida (USA) where he currently resides.

In the pedagogical field he has been professor of French horn and Chamber Music in conservatories in Spain since the 1997. In Miami, FL Lluis also works as a horn and trumpet private instructor. He has vast experience in the treatment of different playing problems (incorrect use of the muscles forming the embouchure, poor or bad air control, problems with the high or low tesiture, poor endurance...etc) using both techniques European and American.

Nowadays Lluis plays in different orchestras in South Florida (in some of them as a principal horn), The Miami Chamber Players ensembles, SoBe Arts Ensembles, also plays in the French horn and piano duo Luminous Duo, and in the wind quintet Take Five WWQ (created with principal players among the professional orchestras in South Florida). Lluis offers private French horn and trumpet lessons and it's a faculty member of the SoBe Institute of The Arts (SoBe Arts) and Play Music among other institutions.